The Inauguration of the People's Salvation Cathedral 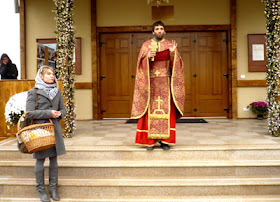 The Romanian Orthodox Church wants to build a huge People's Salvation Cathedral. Of course with money from the state budget (around 900 millions euro). Ironically it will be next to the House of the People, the huge building made during Ceausescu's regime. The construction is on, but near it a small, simple and cheap prefab-church has been already built for temporary use, as a way to mark the territory. The Presidential Candidate organized a public campaign announcing that the People's Salvation Cathedral has been already finished and 11.11.11 was the date set for its inauguration.

For the ceremony the Candidate dressed in priest and, after a very short religious procession, he inaugurated the prefab-church as the actual People's Salvation Cathedral. He also apologized in the name of the Orthodox Church for the exploitation and commercialization of gypsy slaves by the Romanian Orthodox Church that went until later 19th century (a taboo issue for the Church).
The priest announced that the orthodox churches will be open day and night and will serve as a shelter for the continuously growing number of homeless people, pushed away from their homes by the harsh Turbo-Capitalism.

He announced also some possible reforms inside the Church, for example granting women the same rights as men to perform the mass and have access in the hierarchical structure at any level, not just to clean the church and sell candles. He also criticized the hierarchical structure of the Church and its hypocrisy - everything is in gold, a lot of properties and political power. The top members of Church travel in limousines surrounded by police, blocking the traffic for the rest of people. In all these facts, the Candidate-priest recognized the Antichrist - the opposite of the Jesus message encompassing simplicity, poverty, love...

Nevertheless the general tone of his preaching was pervaded by a sense of thankfulness for the honor to inaugurate the People's Salvation Cathedral. The priest was happy to help the Romanian Orthodox Church make such an important step towards christianity: choosing to build a simple and spiritual church instead of the opulent home for the Antichrist.

The official sermon was abruptly interrupted by an aggressive orthodox faction that pushed the priest down the stairs and recommended him to perform a self-decapitation immediately after he would take off the holy costume.
(2011) 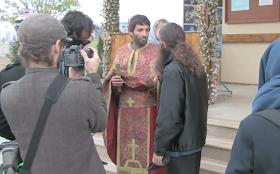 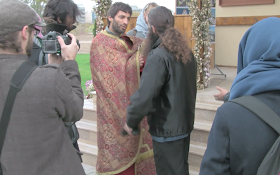