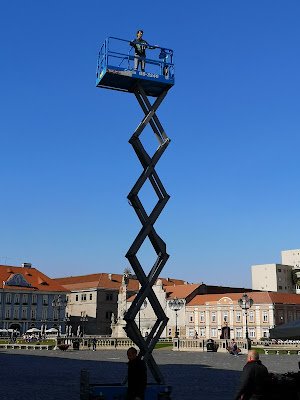 The pillar saints spent all their lives on top of pillars. Unlike the hermits who simply disappeared from the world, the pillar saints didn't retreat in caves, mountains or deserts. Their way to escape the world was in the world, elevating themselves onto devices of solitude in the middle of people. Their withdrawals were performative, they were at the margins, or within cities. The pillars were allowing them to access another horizons, to construct parallel worlds just a few meters above everyday reality. At the same time they appear as strange monuments for the grounded others below, some alien consciousnesses were observing them from up there. This religious/politic/poetic gesture rendered an elated perspective in the public space, a distance to the normalized perspectives, and a danger to contaminate the life under the pillars. People confronted with these alien forms of life were intrigued to understand what could motivate such acts, and to wonder how their own lives, their agitation and their petty dramas, were appearing from the pillars’ heights. Neither a critique nor a protest, the pillar practice was rather an exit from this world and an opening to another. These meta charged ongoing actions were meant to trigger the imagination and the possibility for other worlds to exist. Pillar Artist is a twisted re-visitation of these ancient durational-performances, proto-monuments and pre-artworks. The public is invited to become pillar artists for a while. The work entails a short training and signing of a contract which stipulates that the person accepting this call would live on the pillar for at least one hour.
(2019)
Presented at We Transfer Timișoara.
In memory of Alina Popa.