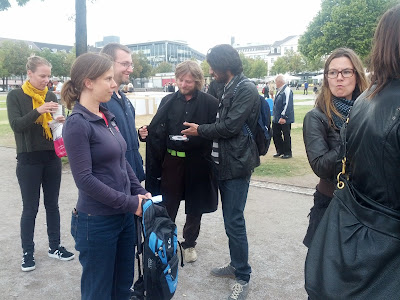 "Hey, do you want some Romanian radical art?
No thanks, I'm ok."

On the 10th of September the Romanian Presidential Candidacy landed in Kassel with great expectations for a fundraiser at Documenta 13 and for a meeting with our accomplices, The Robin Hood Minor Asset Management, during the final SCEPSI installment hosted there by Franco Bifo Berardi.

As our affection for the first world has grown our addiction is getting even more serious. We need the money and the good spirit of the north but we have no more time for applying or negotiating with curators and programmers, our patience has run out and the elections are approaching. The periphery needs cash, now!

This time we came from the splendid fiords of Norway to the frictionless trams of Kassel. At Documenta 13 it seemed that nothing could go wrong, wellness was floating in the air. We encountered smooth and unstriated spaces through which contemporary art consumers were drifting without obstacles from Fridericianum to Neue Galerie, sliding effortlessly from Hauptbahnhof exhibitions to Karlsaue Park and beyond, so that one could say that the whole city, indoors and outdoors, was nicely lubricated in order for the contemporary art-goers to enjoy the big event.

Coming from a campaign event in Oslo, The Romanian Presidential Candidacy felt again the happiness of the west/north all around, this time in Kassel, manifesting through every pore of most of the curator's (and her sub-curators) selections, a glee visible also in the abundant crowd of joyful visitors marching through this well thought exhibition multiplex where diversity and accessibility were the main assets. A shopping center without the shopping, or even better, we named it, Kassel Stock Un-Exchange. A perfect mix of all the tendencies and art streams of today, for those who wanted to bid on object oriented art there were plenty of occasions, for immaterial fetishism dozens of books, lectures and Neue Galerie. During the three months one could have found also occupiers and politically engaged performances, theoretical insights and retro excavation. Just place your cognitive shares and may the best stock win!

But the most disturbing phenomenon discovered by us, as we attended the SCEPSI event, was that Documenta was also a place for politically correct new-ageists dreaming of communal values within a frame (Documenta 13 itself) that harvested 29 million for its budget. They pretended that all was constructed in the name of love and solidarity. A sort of schizophrenia that is typical for the contemporary art operators of today (one can check the Artleaks cases).

As soon as the Robin Hood crew, in its presentation, talked about money and imitating Wall Street Stock Exchange anger exploded in the room of Ständehaus, the mentioning of "touching money" triggered instant irritation, suddenly the civil war that Bifo was prophesying for Europe in the opening of the evening, was right there, indoors, between ideologically correct artists endorsing back-to-the-nature rhetoric, curators, pure activists and the parasites of the Robin Hood and The Romanian Presidential Candidacy, or let's say between a Bane/Bruce Wayne hybrid and Catwoman, if we look at it through the perspective of the last Batman movie.

In the first part of his performance "Scratching on things I could disavow", Walid Raad displayed a sort of map - a very wide and playful one - that was tracing different and specific connections between the art world, capital and the army. Everything on that chart, starting with APT (Artist Pension Trust) continuing with a world-class team of art professionals and leading to Israel intelligence army elite seemed intertwined. A twisted interplay appeared between young ferocious business entrepreneurs, well motivated curators and known or less known visual artists scared of a future without a safety net.

We witnessed how Walid Raad was very vividly describing the rules and conditions of ATP as well as showing us the competition in the creation of algorithms that are meant as compasses in this ever more complex and vast domain of contemporary art market.

When we stepped outside the venue we felt like walking on that map, but something was unsatisfactory. A missing link was somehow eluding our view. We also thought a lot of Robin's Hood own algorithm, that one that allegedly is nosing in the trade temple, desacralizing and detouring money, the type of procedure that disturbed the Documenta Feng-Shui at Scepsi event.

What kind of puzzle-piece was missing from Walid's Raad map? What if another map-board would be added to the Walid's original and insightful one, one left unfinished on which some other ramifications would be drawn? A piece that would also tie the author himself to Documenta and its curators (some of them already APT members), a virtual add-on to the initial map that reveals its tentacles and continues to expand tridimensional in all directions only to come together in the end at Documenta.

Although this intricate web was still difficult to unfurl, one thing was sure, we were nowhere on that cartography. Apparently there were no links to Romanian artists, Bucharest or other Romanian cities because this is another planet, orbiting in the Outernational system. Arabian wealthy cities may be in the interest of APT, but not Europe's periphery. We watched with envy, we would have wanted to be in that map. We felt outcast, no curators called any of us to join in. Romanian performance art is mostly obscure to the global market because apparently it has nothing to sell. There was nothing we could've contributed to the collection of the ATP. I forgot to mention that in order to be a member one has to give to the Artists Pension Trust one work per year for a period of twenty years. So in this give-up-hope situation we felt even more motivated for our fundraiser.

The Romanian Presidential Candidacy was at first intimidated by the grandeur and dimensions of Documenta 13, but as soon as we woke up from the western awe we decided that is time to get some direct cash from anyone interested in buying Romanian contemporary and avant-garde art. During our dealing procedures we met very often the precariat, artists on a budget, people that were unable to spend 5 euros on a CD with rare Romanian radical performance art but most of them carrying the sixty-eight euro catalogue "Book of Books" in their back pack. Documenta was unwarned, as we were dealing art on the halls and corridors of the Fridericianum we met no resistance.
The volunteers and guards were not trained for this, the frame was unsecured in front of this type of activity. We were spotting potential clients everywhere, they seemed hungry for new experiences although in the same old format of a museum/gallery. We became traders of experience economy; we upgraded the customary practice inside a biennale-documenta-manifesta from passive spectatorship to toxic interactive black-market. We mostly approached them while they were standing at long cues outside or inside the Fridericianum.

The fundraiser took us also in front of curators-customers, we tried to sell our merchandise also to baby curators and mature art consumers, journalists, art pilgrims - and many reacted with great scare and suspicion. They made us feel like rough art pushers from the Wild East. But some of them greeted us with smiles while others gave in and emptied their pockets. They risked a crumpled euro investment in romanian performance art without knowing that they actually have invested in the future to come, the best 10 euros they've ever spent. Yet others were inspired, some of the precarious artists we encountered during the proceedings even told us that they would employ our blackmarket strategy!

Parasitism allows for and enhances all the advantages and proclivities of ad infinitum progression. Characterized by mathematical non-trivial self-similarity, it permits a much finer mesh of nooks and crannies where numeric leftovers, energy crumbs and financial quanta escape, spill over and get stuck. This is why sifting, sliding automated algorithmic “internalizers” have been more and more adept at pearl diving through financial “dark pools”.
On the other hand Eastern block corruption, petty crime, parasitism and shadiness have been a mainstay anti-hero of the Western narrative of sanitation, transparency and punitive action. So now, in the era of algo trading, there is also high time for rescuing non-machine readable methods, basic tactics and skills associated with blunt hide&sell economy, art market pickpocketing and under-the-counter praxis.